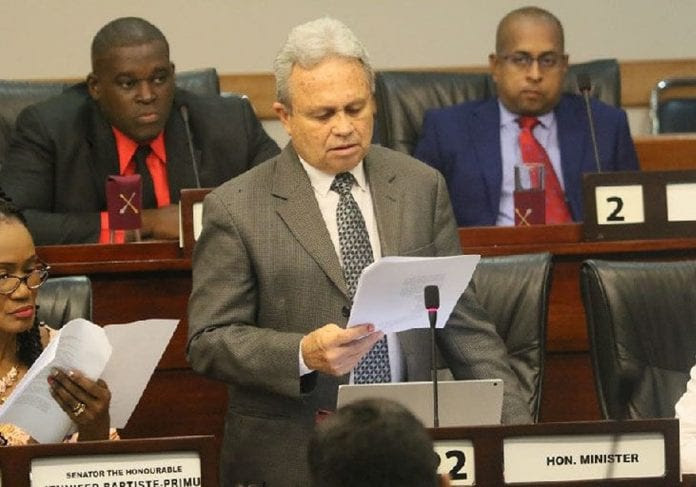 BROOKLYN, NY – The Trinidad and Tobago government on Monday said it expects to lose revenue over nine billion dollars (One TT dollar=US$0.16 cents) as a result of the dramatic decline in oil and gas prices on the global market.

Finance Minister Colm Imbert in a statement to Parliament said in 2020, the government’s objective is to keep the economy moving, stimulate economic activity, provide financial assistance to individuals and businesses, and keep as many people employed as is possible including all workers in the public sector as the twin-island republic also deals with the impact of the coronavirus (COVID-19).

He told legislators that the government’s “comprehensive social, financial and economic support package of measures” since the virus was first detected here, “has expanded our expenditure envelope, in the context of serious erosion of our tax base caused by the collapse of oil prices.

“Accordingly, our fiscal deficit for fiscal 2020, which was originally estimated at TT$5.3 billion, is now expected to expand to TT$15.5 billion, TT$10.2 billion higher than was envisaged in our financial year 2020 budget.”

Imbert said that calculating this revised deficit, the Keith Rowley government has taken note of the fact that the collapse of the price of West Texas Intermediate (WTI) oil to one US cent per barrel last week is hurting other oil prices.

“For example, Brent oil, which is closer in price to our local crude than WTI, has dropped to US$20. Such low prices were previously undreamt of. “

But he said notwithstanding the forecasts of …oil in the US$30 range and gas in the US$2.10 range for the rest of 2020, therefore, our latest revenue projections, are based on conservative prices of US$25 per barrel for oil for the rest of the year and US$1.80 per MMBTU for natural gas.

“This results in a projected loss of revenue in fiscal 2020 of TT$9.2 billion, to which must be added another net one billion TT dollars in extraordinary expenditure. Within that TT$9.2 billion revenue loss, we estimate a loss of TT$3.8 billion in taxes on Incomes and Profits, and losses of TT$750 million in Business Levy and Green Fund Levy, TT$600 million in taxes on Goods and Services and International Trade, TT$2.5 billion in Royalties and Production Sharing and TT$1.2 billion in Profits from State Enterprises, among other areas. “

Imbert told legislators that there is no question that fiscal 2020 will be “exceptionally difficult even if the pandemic fades in the second half of the year thus allowing for a gradual lifting of the containment measures and a re-opening of the economy.

“Indeed, the April 2020 World Economic Outlook envisages a partial recovery in 2021. However, there is tremendous uncertainty around the outlook, given that it can get worse,” he said, adding “we cannot allow this pandemic to destroy our economy and, therefore, while a reallocation of priority areas for spending is inevitable, we intend to maintain our original expenditure target of TT$53 billion for fiscal 2020”.

Imbert said for that reason, the government has been in discussions with certain multilateral institutions and development banks to ensure that in addition to domestic financial resources, appropriate external financing is available to meet the requirements of the expanded fiscal deficit in 2020 and 2021.

“Further, we have taken steps to allow for emergency drawdowns from the Heritage and Stabilization Fund (HSF), not exceeding US$1.5 billion in any given year, for budgetary support in exceptional circumstances, such as the current pandemic,” he said thanking legislators for “unanimously supporting the amendments to the legislation governing the HSF to allow for such drawdowns.

“As a country, we have long recognized the importance of building up a foreign exchange buffer through our HSF which now has a Net Asset value of US$6.1 billion, US$500 million more than when we assumed office in September 2015, despite withdrawals totaling US$600 million since then and the collapse of the US stock market last month,” Imbert said.

In his lengthy statement to the Parliament, the Finance Minister said substantial budgetary resources are being directed to the health sector, and this is aided by external financial support. To deal with the coronavirus.

“We have created a health system parallel to the traditional health facilities to specifically respond to the pandemic,” he said, noting that in terms of international financial assistance to address the unprecedented financial demands of Covid-19, the government is sourcing US$300 million from various multilateral agencies.

Besides, it is also pursuing a further US$500 million for budgetary support from other external sources.

“We have also raised TT$500 million locally to pay for the increased demands for goods and services for the Regional Health Authorities (RHAs) and to settle aged trade payables in the health sector. In terms of cash flow for the Ministry of Health and the RHAs, in the face of this pandemic, therefore, we are on a strong footing,” Imbert said.

He said that the government has a targeted and sizable financial support program for an initial period of three months at a cost of approximately TT$4.5 billion is providing a safety net for the most vulnerable households and businesses as a result of the pandemic.

He said more than 75,000 households, comprising over 200,000 nationals, have benefitted from additional social support measures implemented by the Ministry of Social Development and Family Services so far.

“To date, over TT$65 million has already been spent or committed by that Ministry on Covid-19 relief measures. These measures include over TT$25 million worth of food cards distributed to Members of Parliament to assist parents for a 3-month period, whose children would normally receive meals through the school feeding program, and for other needy persons in their constituencies.”

He said also, addition, the government is currently processing applications for Income Support Grants of up to TT$1,500 per month per household, for persons who are outside of the National Insurance Scheme (NIS) and the Inland Revenue systems who have lost their jobs or incomes as a result of Covid-19 measures, i.e. persons in the informal economy. Rent Relief Grants of up to TT$2,400 per month are also available.

“It is expected that these social support measures will cost up to TT$200 million for the period up to July 2020,” Imbert said, adding that grants totaling TT$10 million per month for the next three months, will be given to religious bodies in proportion to the size of their congregations for them to distribute food to the poor and needy following their existing procedures and programs.

He said this will cost TT$30 million and that a further TT$10 million per month for food support will be given to the Ministry of Rural Development and Local Government for distribution within the 14 Municipal Regions in Trinidad.

Imbert said that the government has processed and authorized the first batch of 1,000 salary relief grants and that if all goes according to plan, these grants will be wired to recipients on Tuesday and arrive in their bank accounts by Wednesday.

“Thereafter, we expect to be able to increase our capacity to be able to process and deliver up to 10,000 new grants per week, as we speed up and streamline the process. These grants are eventually expected to reach as many as 100,000 persons at a cost of TT$400 million,” the Finance Minister said.