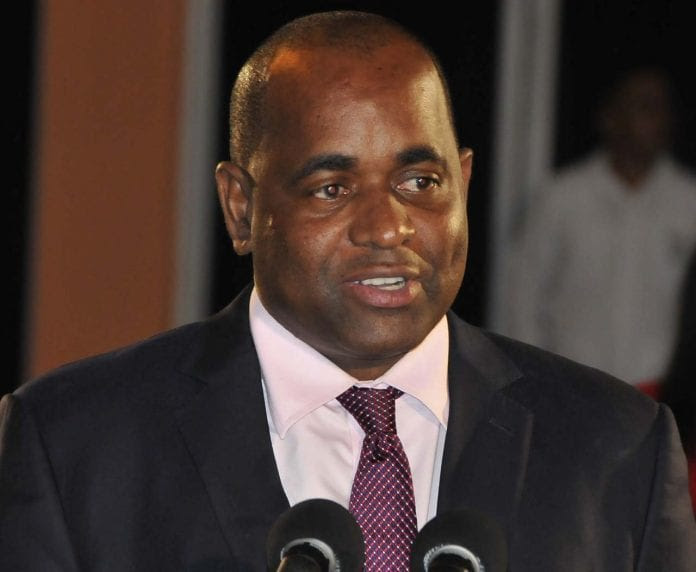 BROOKLYN, NY – Among Caribbean leaders, Dominica’s Prime Minister Roosevelt Skerrit has been making news for the past 15 years—first as the world’s youngest head of government, and particularly since 2017 when a hurricane devastated Dominica.

The youngest and perhaps one of the most resilient prime ministers in the region, Skerrit is seeking his fourth consecutive win in Dominica’s upcoming general elections on December 6.

Skerrit, a husband, and father of one have been the prime minister and leader of the Dominica Labor Party (DLP) since 2004. He made the upcoming election announcement in early November while urging citizens of Dominica in the country and the region to exercise their right to vote.

Skerrit said due to the divisive nature of elections, he felt campaigning should not be carried over into the new year.

“Dominica must mark the start of the third decade of the 21st century with a clear decision about who will lead the country into its future,” he said, stating that his vision for the island is to become the first climate-resilient country in the world and the top tourism destination in the region.

The DLP will go against the island’s main opposition, United Workers Party (UWP) headed by Opposition Leader Lennox Linton. The nominations process for the upcoming general elections began on November 19.

Roosevelt Skerrit became a member of the DLP when he returned to Dominica after studying at the University of Mississippi. He was elected to parliament for the Vieille Case constituency in February 2000 and served as minister of education—establishing the Dominica State College in the early 2000s—and minister of sports and youth affairs.

On January 6, 2004, Skerrit was thrust into the position of Prime Minister of Dominica following the sudden death of his predecessor, Pierre Charles. Two days later, 31-year-old Skerrit was officially sworn into office and became the world’s youngest head of government. After becoming prime minister, he was elected as the political leader of the DLP.

Though Skerrit’s role was initially marred by tragedy, he quickly gained popularity in Dominica as a young, charismatic and dynamic leader. In the general election in 2005, Skerrit retained leadership with an outright majority vote in the legislature, a feat that was last achieved by the DLP in 1975. During this term, he served as finance minister, minister of foreign affairs and minister of national security.

Under his leadership, the government established several policies and new infrastructure relating to education, agriculture, and education. The DLP remained the overwhelming favorites, and this was again shown at the polls in the December 2009 general elections. Skerrit led his party to win a second consecutive outright majority in the legislature, strengthening his Party’s share to 18 of 21 possible seats. During his second term as prime minister, he has held the portfolio as minister for information technology, finance, and foreign affairs.

As prime minister, Skerrit was dedicated to strengthening ties with China, Venezuela, and Cuba, along with establishing new relations with several other countries around the world.

Caribbean leaders like Grenadian Senator Arley Gill vouched for Prime Minister Skerrit as “one of the most visionary leaders in the Caribbean.” The growing popularity of Skerrit within the region was attributed to him and the DLP being re-elected for a third time in December 2014.

His most challenging term as leader, thus far, Skerrit has had to battle natural catastrophes and controversies. In 2017, Dominica was among several islands that were completely ravaged by Hurricane Maria. The hurricane left 65 people dead, damaged all 53 of the island’s health facilities, left the majority of towns in ruins, and caused US$1.37 billion in losses across the island.

Following the hurricane, Skerrit and his government, regional governments and members of the international community sprung into action and began rebuilding Dominica. The education sector was the fastest to recover, as 100 percent of the island’s students were displaced following the natural disaster. The healthcare sector and tourism followed suit.

The development of many sectors such as healthcare and agriculture were aided by China, with which Dominica has developed an even better relationship under Skerrit’s leadership.

Now two years after Hurricane Maria, visitor arrivals have increased this year, new hotels are being opened, and several new schools have been built, in addition to the rebuilding of the old ones.

Some Dominicans at home and abroad proudly hail Skerrit’s leadership in their country’s rebound after the hurricane but, despite their commendation, Skerrit is now forced to defend his leadership and the role of his government on December 6.

Despite Dominicans in recent weeks protesting electoral reform to ensure free and fair elections, some interpret these protests as political partisanship and also believe Skerrit’s prospect for re-election is favorable, due to his 15-year track record.