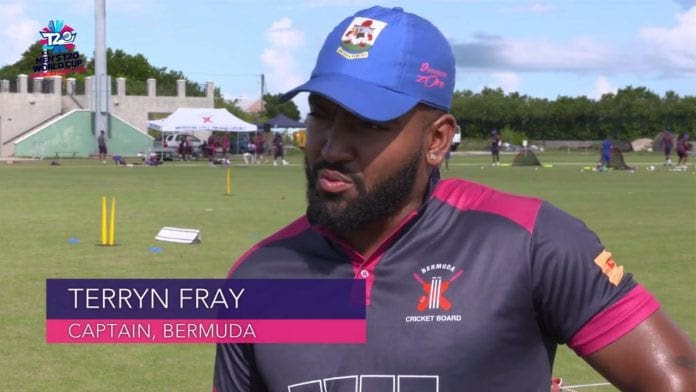 BROOKLYN, NY — Terryn Fray has been named the captain of a 15-man Bermuda squad to take part in the first series of the ICC World Cup Challenge League B against Hong Kong, Italy, Jersey, Kenya, and Uganda.

The series, taking place between December 2-12 in Muscat, Oman, is the start of the road to the 2023 50-overs World Cup in India.

Between 2019 and 2021, there will be 90 matches between both League A and B with each team playing 15 games and fighting for points to move on to a qualifier play-off in 2022.

Bermuda’s most recent international outing saw them finish 13th of 14 teams in a qualifier in the United Arab Emirates (UAE), for six places in next year’s T20 World Cup in Australia.

They lost all six of their games with only Nigeria, late replacements for suspended Zimbabwe, finishing below them with an inferior net run rate.

The squad shows a raft of changes from the team who were largely outplayed in the UAE, with Tre Manders, Justin Pitcher, Kyle Hodsoll, Zico Burgess and Pierre Smith called up.

Manders is returning after suffering a broken ankle in a motorcycle accident in July.

Also missing is 44-year-old Janeiro Tucker, although he will continue to serve as an assistant coach under Head Coach Herbie Bascome.

Bermuda’s first game will be against Hong Kong on December 3.

Calvin Blankendal, the Bermuda Cricket Board’s executive director, said: “This is the beginning of our three-year qualification campaign which will also aid in increasing our international ICC rankings.”

Bermuda’s one appearance in the historic 50-overs World Cup came in the 2007 tournament staged in the Caribbean, when they failed to advance from the group stage after losing heavily to India, Sri Lanka and Bangladesh.

England is the current champions, having beaten New Zealand in this year’s final at Lord’s in London, under hitting more boundaries after the teams tied and a super-over still could not separate them.