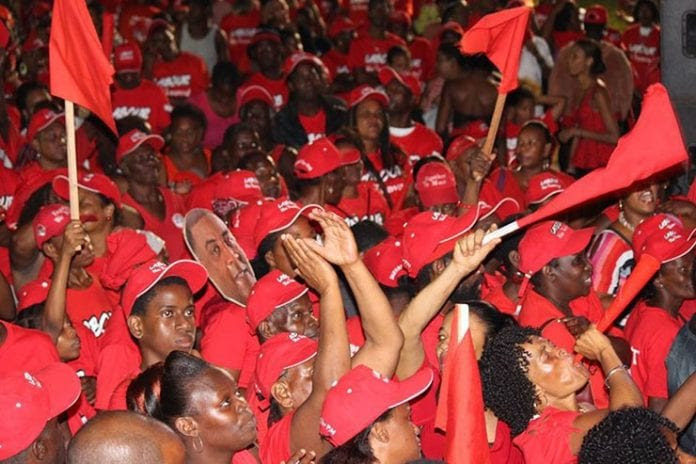 BROOKLYN, NY – It was a landslide victory for the governing Dominica Labour Party (DLP) at the December 6 General Election in Dominica, as the party won the majority of legislative seats to secure their fifth consecutive term in office and Prime Minister Roosevelt Skerrit’s fourth consecutive election win.

Preliminary results released by the Dominica Electoral Office on Friday night showed the DLP winning 18 of 21 legislative seats to secure an easy win, as many, including Prime Minister Skerrit, had predicted.

In a pre-election interview with Caribbean Media Corporation (CMC), Skerrit said, “We are going to have a landslide victory in Dominica, the people are with us, the momentum are with us, we have the better policies, the better programs, the better strategy and really we are disappointed with the campaign of the Workers Party.”

Lennox Linton, the leader of the main Opposition, United Workers Party (UWP), sang a different tune, saying that he did not believe that elections would be “free and fair” but was confident of the UWP’s chances of victory. “I say not free because we now have police officers from several Caricom (Caribbean Community) countries – the Regional Security System (RSS) – we are told, to maintain law and order and shortly after they arrived here we woke up to the news that people in Salisbury had been tear-gassed.”

We think that is clearly a challenge to freedom and the ease with which people should move around, freedom of mind to go and cast their ballots, and then you have the issue of fairness, where the ruling party is spending those huge sums of money bringing people in to vote for the ruling party in the elections,” he added.

His view seemed to coincide with that of many Dominicans who, for weeks, had been protesting the need for electoral reform in the country. Last week, a group of politicians filed a formal application to postpone the election, arguing that there were irregularities in the list of electors and election reform is necessary for the country to have fair and free elections.

But on Tuesday, High Court Judge Justice Bernie Stephenson denied the application, saying that court did not have the jurisdiction to grant such an injunction since President Charles Savarin had already issued the writ to hold the polls.

Although both parties were concerned about the level of violence that would be present on election day, politicians and residents corporated with members of the police force who were present at the polling stations to ensure smooth voting.

According to the Electoral Commission, 74, 895 electors had been eligible to cast ballots at the 255 polling stations across the country.

Skerrit’s wife, Melissa Pop one-Skerrit, now joins the wives of the prime ministers of Antigua and Barbuda and Jamaica, who have all successfully contested general elections for the first time. She won the Roseau East seat securing 1.056 votes as against 866 for the UWP’s Glenroy Cuffy.

Opposition Leader Lennox Linton, who has retained the Marigot constituency, polled 728 votes to stave off a challenge from newcomer Gregory Reviere, a former national calypso monarch, who polled 423 votes.

The opposition United Workers’ Party lost three of its six seats that were previously held.

Roosevelt Skerrit, 47, now goes into his fourth term and 16th year as Prime Minister of Dominica.