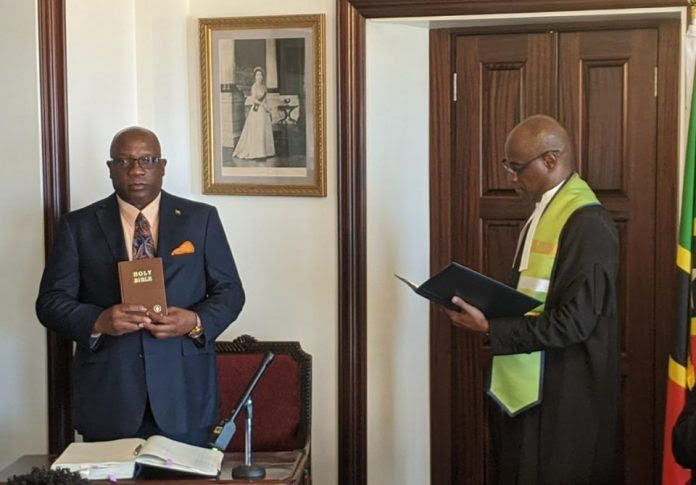 BROOKLYN,NY– Dr. Timothy Harris was sworn in as Prime Minister for a second term, on Sunday.

Harris’ Team Unity administration, which is comprised of the Concerned Citizens Movement (CCM) in Nevis, the People’s Action Movement (PAM) and the People’s Labour Party (PLP) both in St. Kitts, was re-elected with an overwhelming majority on Friday, with nine out of the Federation’s 11 constituencies delivering a win for the incumbent government.

During the ceremony, Harris pledged to fulfill his campaign promises to people of the twin-island federation.

“I promised I would not let you down and promised the administration that I would lead will not let down the people of St. Kitts and Nevis.”

Harris who hailed the outgoing Team Unity Cabinet said that it was an honor for him to have the opportunity to be sworn in for a second time as Prime Minister.

“We shall create the modern history in St. Kitts and Nevis by making the example of the best managed small island state. That is my pledge and that is my commitment.”

Also, Harris said this would be his last term serving as Prime Minister, a promise he made in 2015, then saying he would only serve two terms if elected.

According to the Prime Minister, the success at the polls is a vindication of excellent work on behalf of the people.

“Our performance lived up and indeed some will say surpassed the promise we had made. Friday we the people of St. Kitts and Nevis made history again as the first coalition government in the Federation to return after an election with an increased majority.”

He said in his constituency it was the strongest result of the 27 years of his representation.

Harris noted that the general election was a consensus on how the population wanted the country to be run.

The prime minister and the cabinet of ministers will be announced in the coming days.

Meanwhile, messages of congratulations have been sent to Harris from around the world.

“Please accept the reassurances of my highest consideration,” President of the Republic of China (Taiwan), Dr. Tsai Ing-wen, who in January was also re-elected in a landslide that secured her a second term.

“On behalf of the people and government of the Republic of China (Taiwan), it is a great pleasure to extend my heartfelt congratulations to you and Team Unity on your decisive victory at the polls, endorsing your leadership of the Federation of Saint Christopher and Nevis for another term,” Taiwan’s President also said, adding: “I am confident that under your leadership, St Kitts and Nevis will continue to make great strides in terms of peace, progress, and prosperity.”

Chairman of the Organisation of Eastern Caribbean States (OECS), Prime Minister of Antigua and Barbuda Gaston Browne extended congratulations in a press release.

“The people of the Federation who are the supreme arbiters of choice of government have spoken clearly,” the statement said.

“As Chairman of the OECS, I extend warm congratulations to Prime Minister Harris and his Team Unity on his victory and I look forward to continuing the close collaborative relationship that exists at the OECS Authority as we collectively face the pestilential challenge of COVID and its utterly devastating effect on our economies and livelihoods,” Browne further stated in the press release.

“This electoral victory reflects the renewed confidence of the people of St. Kitts and Nevis in your leadership and your vision for the future of their country.”

Harris has also received congratulatory messages from St. Lucia, Grenada, and diplomatic allies such as the United States and Venezuela.