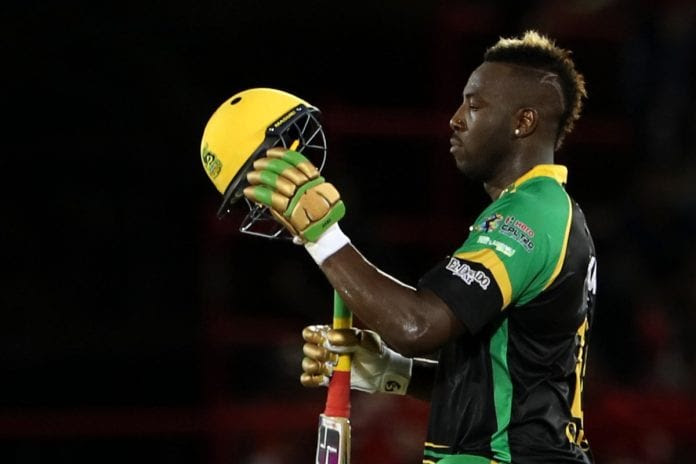 BROOKLYN, NY – West Indies all-rounder Andre Russell has announced that the Caribbean Premier League (CPL) 2020 season will be his last with the Jamaica Tallawahs, as he accused the franchise’s ownership of poor communication, and also sought to distance himself from the release of Chris Gayle from the team.

In an Instagram live on Tuesday night, a day after Gayle lashed out at the Tallawahs management and assistant coach Ramnaresh Sarwan, Russell said he would play out the last year of his contract and “try and win because that is all I play for”, but he said he would not be returning.

Tallawahs signed Russell in 2018 after he returned from a one-year ban for a doping violation.

“This will be my last because I’ve been getting mixed up with all this (expletive) that is happening and I can’t be playing cricket and I am not comfortable,” said Russell, who was named earlier this month in the 2020 edition of Wisden Cricketers’ Almanack as the leading T20 cricketer in the world.

“I think another franchise that has been coming last and fifth and fourth in CPL will appreciate me more. I am not getting it here.”

“This is the weirdest franchise that I have ever played in…. People that supposed to reach out to you as an individual – and I am not just a normal player in the Jamaica Tallawahs team, I was once a leader – I realize how they look at things and how they do things,” he added.

Russell suggested he was not happy with the treatment meted out to Gayle, who played his first four CPL seasons with Tallawahs and then turned out for the St. Kitts and Nevis Patriots in 2017 and 2018 seasons before returning to his home franchise in 2019.

In a series of YouTube videos, Gayle, who has been signed to the St. Lucia Zouks this year, accused Sarwan of having a big part to play in the two-time CPL champions releasing him. He also charged that the management of the franchise was “playing games” with him before his departure.

In a statement on Wednesday, the franchise said Gayle’s release was strictly business and cricketing decision taken collectively by the leadership that did not include Sarwan.

But during his Instagram Russell pointed to “unprofessionalism” and poor communication as issues within the franchise.

“To deal with Chris Gayle the way that they have dealt with the situation is nothing to do with cricket. It’s more personal.”

Russell also sought to make it clear he knew nothing about the plan to release Gayle and was not part of any conspiracy to get rid of him.

He said he only knew about Gayle leaving the team when the T20 specialist sent him a copy of a news report that suggested he (Gayle) would not be retained. Russell said Gayle had asked him if he knew anything about that.

“I called Chris instantly and I addressed the situation. I said to Chris that the only thing I heard was that Floyd Reifer was potentially going to be the coach,” Russell said.

“The communication was the biggest problem when it comes to all of this. Up till now, I don’t know anything that is going on. I don’t know anything that was happening in the Jamaica Tallawahs team. And now it looks like me, Rovman [Powell, who is tipped to be the new captain], Floyd Reifer plan up, and I get rid of Chris. Why would I get rid of Chris? Chris has a three-year contract with Tallawahs. You’re not supposed to breach a contract. As a franchise, you can get in trouble with that.”

Furthermore, Russell said, the Tallawahs’ CEO Jeff Miller had only contacted him to check whether he was going to sign the contract for the franchise to retain him, and he was kept in the dark about other matters.

Looking ahead to what he said would be his final season with the Tallawahs if the eighth edition of the CPL is held August 19 to September 26 as scheduled, Russell said: “This is going to be an awkward dressing room. It’s going to be an awkward CPL, but no one will see that when I step out to bat or to bowl while I am on the field because I play to win.”

Amid the COVID-19 pandemic, CPL organizers are to decide whether the play will go ahead with special social distancing measures, including playing without international players and using only a few stadiums as venues to mitigate against widespread contact.

Blow for CWI as South Africa Rules Out Caribbean Series