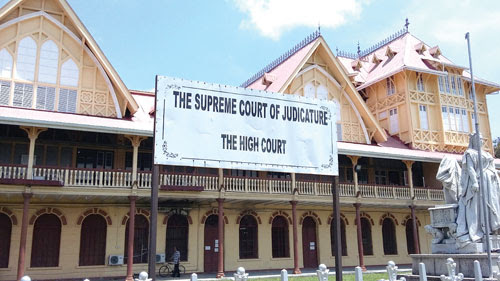 BROOKLYN, NY — A High Court judge yesterday granted an injunction against the Guyana Elections Commission (GECOM), preventing it from carrying out a national recount of votes from the disputed March 2 regional and general elections. Justice Franklyn Holder said that the injunction remains in effect pending a hearing on Friday, March 20.

The injunction was granted to the private citizen, Ulita Moore, and restrains GECOM from setting aside or varying the declarations already made by the 10 electoral districts with any other documents or declarations until the hearing and determination of the judicial review of the application.

The interim injunction also restrains GECOM from permitting or authorizing “any person or persons to any agreement between the president of Guyana and the leader of the Opposition and or any agreement between the Guyana Elections Commission and the Caribbean Community or at all, to count or recount any ballots cast by electors at the March 2, 2020, general and regional elections until the hearing and determination of the judicial review application.”

Earlier, GECOM had said that the recounting of ballots in the election “would commence immediately” after it had conducted the legal examination of a document signed by President David Granger and Opposition Leader Bharrat Jagdeo.

Both Granger and Jagdeo had last weekend agreed to the national recount exercise following discussions with the chairman of the Caribbean Community (Caricom) and Barbados Prime Minister Mia Mottley.

In a statement, GECOM said that it “receives a copy of the Aide Memoire” signed by both men and witnessed by Caricom Secretary-General Irwin LaRocque.

“As a consequence, the commission is currently examining the legal ramifications of this agreement by the Constitution of Guyana,” GECOM said, adding while it has considered the proposal and has implemented systems for the organization of the exercise “as a safeguard mechanism, all legal issues must be properly addressed, including the gazetting of the process as requested by the high-level Caricom delegation.

“Once finalized, the counting would commence immediately. The outcome of the commission’s decision in this regard would be communicated and adequate notice on the start time for the exercise would be provided,” the GECOM statement, signed but its public relations officer, Yolanda Ward, indicated.

Over the last weekend, a five-member independent Caricom team arrived here to overlook the recount of votes in all 10 regions.

The Caricom team was due to leave here yesterday following the High Court granting the injunction.

Granger had asked Mottley to ensure that the Caricom initiative operates within the legal framework of the Constitution of Guyana and respect the role of the elections commission and the rulings of the Supreme Court.

“The interim decision also restrains the Chief Elections Officer Keith Lowenfield from submitting any report of the total votes cast for each List of Candidates under Section 96 (1) and (2) of the Representation of the People Act, save and except the votes counted and the information furnished by the Returning Officer under Section 84 (1) of the Representation of the People Act until the hearing and determination of the judicial review application filed herein.”

The respondents to the court matter are the Guyana Elections Commission, the chairman of the commission and the chief elections officer.