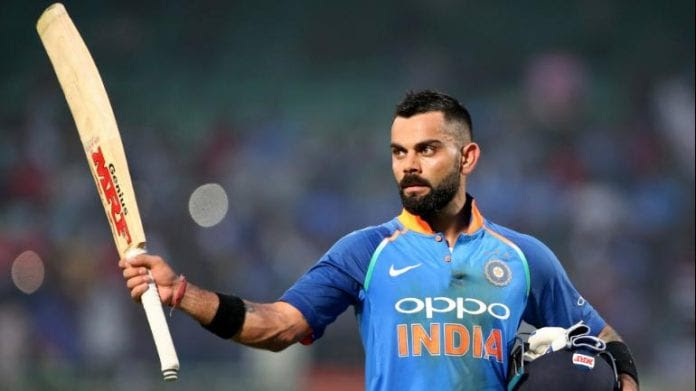 BROOKLYN, NY  – A breathtaking Virat Kohli masterclass dashed West Indies hopes of victory in the opening Twenty20 International on Thursday as India trounced them by six wickets with eight balls to spare, to take a 1-0 lead in the three-match series.

Set an imposing 208 for victory at the Rajiv Gandhi International Stadium, India found themselves off the pace somewhat on 96 for one at the end of the 11th over, with the required run rate climbing to nearly 12-½ per over.

However, Kohli came to his side’s rescue with a sparkling career-best unbeaten 94 off 50 balls, which saw India plunder the last 112 runs needed for victory off just 46 deliveries.

West Indies were in the contest thanks to Shimron Hetmyer’s maiden T20 International half-century, as they piled up 207 for five off their 20 overs – their fifth-highest total in the format and highest in nearly three-and-a-half years.

They were in danger of stalling and falling short of the 200-run mark before Jason Holder lashed a nine-ball 24 not out to help the Caribbean side gather 63 runs from the last five overs.

For West Indies, the defeat was the 18th in their last 22 T20 Internationals inside the last two years, and their seventh straight loss to India.

Sent in, they lost Lendl Simmons for two in the second over, nicking a Deepak Chahar out-swinger to slip but a series of strong partnerships stabilized the innings and put them in command.

Lewis, who punched three fours and four sixes in a 17-ball cameo, put on 51 off 26 balls for the second wicket with King, who in turn added a further 37 for the third wicket with Hetmyer.

When King missed a charge at left-arm spinner Ravindra Jadeja and was stumped off the first ball of the 11th over after counting three fours and a six, Hetmyer and Pollard combined in a 71-run, fourth-wicket partnership to dominate India’s bowling.

Capitalizing on unusually poor fielding, Hetmyer belted two fours and four sixes in a 41-ball knock while Pollard – twice let off by Rohit Sharma in the 17th over – clobbered four and four sixes off just 19 deliveries.

Leg spinner Yuzvendra Chahal broke the stand when Hetmyer holed out to deep square in the 18th over and Pollard followed two balls later, bowled leg stump by a googly.

Holder ended the innings with a flourish, however, smashing a four and a couple of sixes in an unbroken 34-run, sixth-wicket partnership with Denesh Ramdin (11 not out).

India then enjoyed a breezy start to their reply with Rahul posting 30 off 20 balls for the first wicket with Rohit (8).

When left-arm spinner Khary Pierre (2-44) got Rohit to hole out to Hetmyer at deep mid-wicket in the fourth over, West Indies were fancying their chances of making further inroads but Kohli arrived to turn the tide.

He smashed half-dozen fours and sixes, posting exactly 100 for the second wicket with Rahul before adding 48 for the third wicket with wicketkeeper Rishabh Pant (18), as India reclaimed the momentum.

Kohli struggled initially at the start of his innings, scraping 20 from his first 20 balls before exploding to reach his half-century off 35 balls with an audacious punch over the ropes at long-off the expensive Holder.

Rahul carved out five fours and four sixes before finding Pollard in the deep off Pierre in the 14th over and Pant bludgeoned two sixes before picking out Holder at long-off with left-arm pacer Sheldon Cottrell.

By the time Shreyas Iyer (4) drove a return catch to Pollard at the end of the 18th over, India required just 15 from the last 12 balls, and Kohli tore into seamer Kesrick Williams in the penultimate over with a couple of sixes as India won emphatically.

S Iyer c and b Pollard 4

Soca on the seas